An improved methane to syngas catalyst

RESEARCHERS at the Institute for Catalysis at Hokkaido University, Japan, have created an improved catalyst for converting methane to syngas. Further development of the catalyst could lead to more economical syngas production.

The combined rhodium/cobalt catalyst on a mordenite zeolite support was able to convert 86% of methane to syngas with minimal production of coke byproduct.

Syngas, or synthetic gas, is a precursor used in the manufacture of polymers, pharmaceuticals and synthetic petroleum. The gas, which is primarily a mixture of carbon monoxide and hydrogen, can be made either by exposure of methane to steam (900°C), or partial oxidation of methane (POM).

POM is more economical, but there are drawbacks associated with the catalysts used. Base metal catalysts, such as cobalt and nickel, require high temperature (800°C). Noble metals, such as rhodium and platinum have higher catalytic activity and selectivity, and work at lower temperatures than base metals, but are also more expensive.

The new catalyst used by the Hokkaido researchers combines the properties of noble and base metal catalysts. It was able to successfully convert methane to syngas at only 650°C and maintained activity for at least 50 hours.

Hirokazu Kobayashi, study co-author and assistant professor at the institute, said: “Our catalyst can efficiently convert methane to syngas at 650°C, a much lower temperature than in conventional methods. This could lead to more efficient use of methane and contribute to the development of a low-carbon society.”

The ability of the novel catalyst to function at 650°C would enable the use of common stainless-steel reactors. This avoids the use of Inconel, special heat-resistant alloys that are “expensive and inferior in workability.”

As the researchers tested the developed catalyst under very diluted conditions, Kobayashi says they now need to “evaluate the catalytic performance at higher concentrations of the gases to be more industrially feasible.”

He added: “We may optimise the catalyst or develop a new catalyst for the purpose.”

The research is still at a fundamental stage, but Kobayashi hopes to start bench-scale tests within 3–5 years.

The group is currently in talks with an as-yet undisclosed company about industrial collaboration.

The researchers dispersed tiny cobalt particles onto mordenite zeolite, and mono-atomically dispersed rhodium onto the cobalt. The modification of the cobalt with rhodium dramatically improved catalytic performance and durability.

When using cobalt as a catalyst in the methane to syngas reaction, cobalt is oxidised to nearly inactive cobalt oxide. The rhodium modification used in this study allowed conversion of the oxide back to the active state via hydrogen spillover. 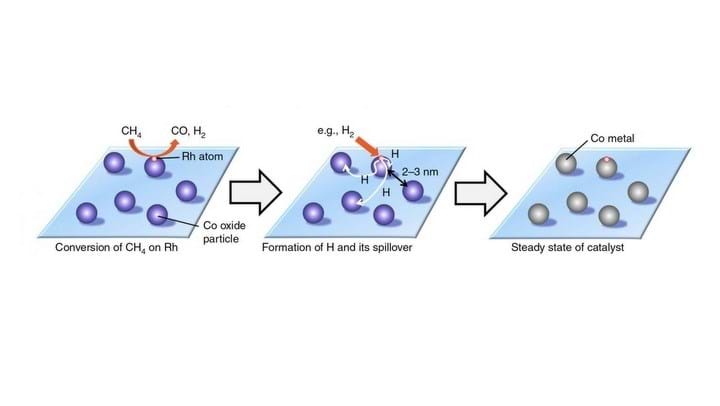 The study proposed that the contained rhodium generates hydrogen atoms from methane or hydrogen molecules. The generated atoms spill over onto the supporting material and are used to convert cobalt oxide back to cobalt, enabling continued catalysis.