MEET Filipino gold miner Leoncio Na-Oy. For almost a decade, Na-Oy has been working with international NGO Pure Earth to test and teach a century-old, traditional method of mercury-free gold mining that local miners practised in his hometown of Benguet in the Philippines.

He has travelled to Bolivia, Peru, Mongolia and beyond with Pure Earth to spread the word to fellow miners. To date he has trained hundreds of miners worldwide.  Some of the miners Na-Oy has taught have gone on to train other miners in the technique. Pure Earth’s programme in Mongolia has grown that way, with over 1,000 miners trained to go mercury-free, and a long wait list of others eager to learn.

In much of the world, millions of artisanal and small-scale miners use toxic mercury to help them extract tiny pieces of gold, in part because it is the only method they know.

“Miners in other areas are just not aware of the Benguet method. There was a group of miners from Compostela Valley Diwalway who came to Benguet to see us. When they saw the process they all were amazed that we could recover gold without mercury,” remembers Na-Oy.

As much as 25%  of the global gold supply comes from artisanal gold mining, which is today the leading source of mercury pollution in the world, accounting for over 30% of global emissions.

Na-Oy turned to gold mining 33 years ago when he could not find a job after graduating with a history degree. He began practising the local, traditional technique used by miners in his village, but he also saw miners using mercury that was introduced by large-scale mining concerns in the 1960s and 70s.

Pure Earth
Change: Na-Oy's innovations include using a flat pan instead of a concave pan, that allows miners to pan a greater volume of material

The problem with mercury

Even in small amounts, mercury may cause serious health problems, and is a particular threat to the development of infants in utero and in early life. Mercury disrupts the physiological and neurological development of children, attacks the central nervous and immune systems, targets organs, and in higher doses, it can kill.

“The saddest story I know about was a small-scale miner, who did not understand the effects of mercury. He used mercury heavily. On the seventh year, his health started to deteriorate, and he began showing all the symptoms of mercury poisoning. As his health got worse, all his savings were consumed by his medications. I was about to bring him to the expert toxicologist in our region, which was open on Thursday. However, on the Tuesday of the same week, he died,” remembers Na-Oy.

“This is a true story. The man I am referring to was my brother in-law.”

While gold miners and their families and community are most directly impacted by their use of mercury, the toxin also has the ability to travel far and wide, dropping into rivers and oceans, where it accumulates in fish and shellfish that is consumed worldwide. This is one reason why pregnant women everywhere are often warned against eating fish.

The UN Environment estimates that 19m people are at risk of exposure to mercury globally. As of 2015, Pure Earth’s Toxic Sites Identification Program has mapped over 450 sites around the world where exposure to mercury threatens the health of residents.

As much as 25% of the global gold supply comes from artisanal gold mining which is today the leading source of mercury pollution in the world, accounting for over 30% of global emissions

As a vocal proponent of the mercury-free method, Na-Oy has worked to adjust and update the traditional Benguet method over the years in order to make it more efficient, adaptable, and therefore attractive to gold miners worldwide.

His innovations include using a flat pan instead of a concave pan, that allows miners to pan a greater volume of material, and using a finer cloth, in place of the traditional Abaca sackcloth, to increase the capture of finer pieces of gold. Because the method he teaches seems to return much more gold at lower cost, he is succeeding in changing minds – one miner at a time.

“After one of our trainings in the Philippines, we encouraged the miners to do their own comparisons to observe the advantage. The following month, when we went back to follow up, we found that 80% of the 2,000 miners had adopted the mercury-free method,” reports Na-Oy. “Some said their gold recovery had doubled and others said their recovery went up by 40% and their expenses went down because they stopped buying mercury, which at that time cost about ₱12,000/kg (US$230/kg) – which they used up in ten days.”

“In Peru, in a place called Vallecito, miners also experienced the same thing. A representative from the Ministry of Mines organised a competition between the local Inca method; the shaking-table method; and our method. The results were that the local Inca method recovered 2.8 g of gold; the shaking table was not able to produce any results; while our method was able to recover 3.4 g of gold.”

“There are many alternatives being taught, but the costs are very high and the efficiency is questionable,” says Na-Oy.

“This method we are teaching is the cheapest alternative to the mercury amalgamation method. It does not require huge capitalisation, yet it can recover much more than mercury,” he adds.

“My desire is for artisanal and small-scale miners everywhere to go mercury free and to be responsible miners. This is my hope for a better future.”

Artisanal and small-scale gold miners extract very tiny bits of gold, sometimes working land that has already been stripped by larger mining companies. It is a time-intensive, multi-step process, using simple tools and contraptions that miners often build themselves.

The steps to extracting gold are similar the world over but with variations, depending on the terrain, the quality of ore, and other factors. But it almost always involves using mercury to bind small grains of gold into an amalgam, which is then burned off, releasing vaporized mercury into the environment and atmosphere, leaving behind the gold.

Because different methods are viable in different mining locations, Pure Earth is exploring a variety of techniques to reduce mercury, offering a range of solutions to miners around the world. Na-Oy and his team help by testing and adjusting their mercury-free method to suit each mining community. Here is what going mercury-free looks like in the mountains and rainforest of Peru.

Going mercury free in the rainforest

In 2016, Peru declared a state of emergency in Laberinto and other districts of Madre de Dios, due to widespread mercury pollution caused by artisanal and small-scale gold mining activities in the Peruvian Amazon.

In Laberinto, with its soft alluvial soil, Na-Oy and his team determined that the key to going mercury-free is panning.

Instead of mixing the gold-rich alluvium with mercury, Na-Oy instructs the miners in Laberinto to add water to the alluvium and pan. Na-Oy demonstrates to the miners that what he gets with panning is a more concentrated gold mixture, which he then burns off with non-toxic borax, rather than mercury.

Borax lowers the melting point of the mixture, causing all the other materials to oxidise and break down, leaving behind pure gold.

Na-Oy has also taught this method to women gold miners in Mongolia, who work to extract very tiny bits of gold from mine waste.

In areas like these, where mercury is being extracted from soft alluvium, the mercury-free technique does not require much investment in new equipment, which makes it easier for miners to adopt. All miners need to do is purchase a pan and practise panning. 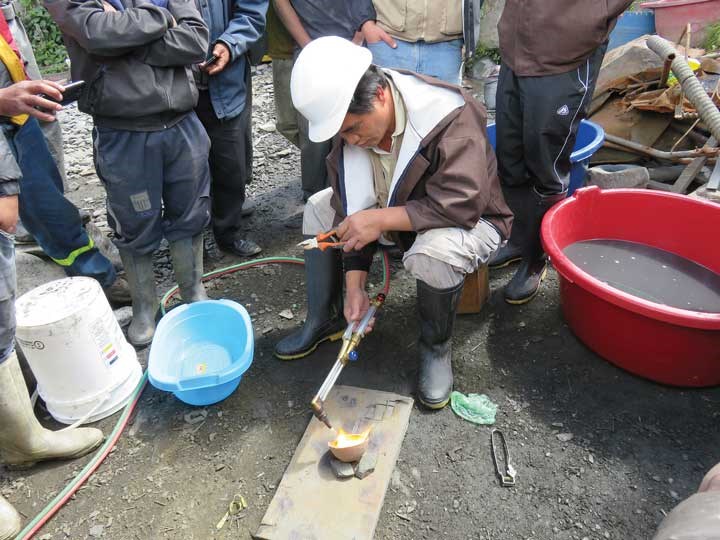 Going mercury-free in the mountains

In Ollachea, Peru, where mining is done in the mountains, the process involves ore crushing and sluicing.

Miners in Ollachea place ore in a ball mill – a barrel-like machine filled with metal balls – and rotate it until the ore is crushed into a fine powder.

The crushed ore is then placed under large boulders along with elemental or quicksilver mercury. A man (sometimes a child) is tasked with standing on the boulder, rocking it back and forth, sometimes for hours. This force helps to bind the mercury to the gold, creating an amalgam.

During this process, mercury is  released into the air and water. In such close proximity, the miners are all exposed to danger. They wear no protective gear except hard hats, and use their bare hands to sift through the water and handle mercury.

Instead of using mercury, Na-Oy teaches the miners in Ollachea to separate gold from the crushed ore by sluicing. This is done in a sluice that he shows them how to build using simple materials. When complete, the sluice box has several chutes that fit together like a water slide.

Na-Oy places the grey-colored crushed  ore into the start of the sluice box, and fills it with water. As the water washes the ore from the sluice box down a series of chutes, gravity pulls the heavier gold pieces down, while lighter waste material washes away. Gold settles at the bottom of the chutes.

After several sluicing runs, the cloth is carefully removed from the chutes and rinsed in tubs of water.

With a concentration of tiny gold pieces now in these tubs, it is time to pan.

Panning produces a concentrated gold mixture, which Na-Oy combines with borax, then burns off.

This photo shows the difference between the gold recovered using mercury, and without mercury, in Ollachea.

Breaking the toxic link between gold and mercury

If all miners worldwide could be convinced to switch to a mercury-free method, it would not only radically lower the amount of mercury released into the atmosphere globally, but it will also improve the health of millions who live near and far from gold mining activity worldwide.

Consumers everywhere can make a difference by learning more about where their gold comes from, and demanding responsible mercury-free gold. Pure Earth has been working with the jewellery industry and leading designers to raise awareness with an annual special collection of responsibly-sourced jewellery that is auctioned off to support Pure Earth’s work, including efforts to train artisanal gold miners to go mercury free. Learn more at www.pureearth.org.

Pure Earth is working in Peru on a project funded by the US Department of State to assist the Peruvian Government and civil society in assessing artisanal gold mining sites, planning remediation efforts and strategies for alternative livelihoods, and sustainably restoring affected natural resources. Partners include the Ministry of Environment (MINAM: Ministerio de Medio Ambiente) of Peru.