AFTER a ten-second vertical sprint, rock-climbing Olympians will have to clamber inch-by-inch to dizzying heights, finally creeping sideways to gold in 2020. I’m far from an expert on battery technologies, but I’m into rock climbing – and my visit to ZapGo reminded me of the sport’s controversial format for its first Olympic Games.

For a single medal, three very different events will be combined. The first, speed climbing, is a pure test of explosive power. Lead and bouldering, on the other hand, require great endurance for longer, more technical climbs. This has given the debutant sport something of an identity crisis, well summarised by bouldering world champion Shauna Coxsey as “like asking Usain Bolt to run a marathon and then do the hurdles.”

Imagining a Battery Olympics, it seems to me that supercapacitors would win the sprint. Lithium ion cells, on the other hand, are more Mo Farah than Bolt. But ZapGo’s trademarked carbon-ion, or C-ion, technology is striving for the all-round power and stamina for top spot on the podium.

Technically, ZapGo’s C-ion technology is not a battery. It is a reinvention of an energy storage device called a supercapacitor – also known as an ultracapacitor, or supercap. The company was founded in 2013 using novel research from the University of Oxford, and uniquely incorporates ionic liquid electrolytes and nanocarbons, including graphene, into cells.

“I think in terms of power density, you’re not getting near it with battery technologies,” Hugh Sutherland, head of development at ZapGo, tells me. His background includes a PhD in polymer chemistry from the University of Surrey, before several years developing fuel cells and helping research institutions make the most of their IP. We are in a café by his office at the Harwell Science and Innovation centre, close to the Diamond particle accelerator.

Explaining the technology, Sutherland talks a lot about power density and energy density – or power vs stamina. Typical supercaps can store and deliver electrical energy at orders of magnitude faster than batteries, due to very high power densities. However, low energy densities mean they cannot work for a long time.

The new materials employed in C-ion cells can operate at higher voltages due to improved stability, while the ability to control porosity of electrodes allows for significantly enhanced energy density.

And increasing voltage is key, says Sutherland. “If you have a capacitive energy storage device, the amount of energy you can store is related to the square of the voltage. So every small amount we can go up in voltage gives us a square increase in our energy storage capability.” In doing so, ZapGo is trying to do is create a supercap with a credible runtime compared to lithium ion. 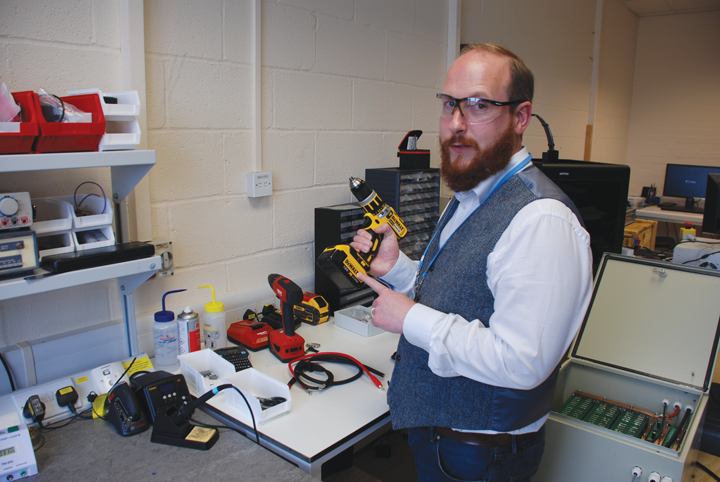 To show me the potential of C-ion, Sutherland charges up a bright yellow household power drill containing prototype, “Gen2” cells – in only ten seconds. Running off a bank of  these cells, the drill stops spinning after about 3 minutes. The technology is currently in its third, breakthrough phase of development, “Gen 3”. In terms of marketability, Sutherland explains that Gen 3 is all about smartly implementing fast charge and use cycles into the right products, and commercial quantities of the cells will be made in early 2018 with manufacturing partner Li-Fun Technology. Suitable applications could include power tools, handheld vacuum cleaners, or phone powerbanks.

“I think what’s really interesting in the market is that the drill that some people buy, they may only use for 15-30 minutes in its entire lifetime. If it takes four hours to charge every time you want to use it, wouldn’t it be excellent to have a battery pack you could charge in ten seconds? Fine, it only does ten, 15 screws, but hey – you pick up your screw, put it in the wall, put your drill back down, and by the time you pick it back up again it is fully charged. And you don’t get a fade in torque because of the power characteristics: the state of charge is not important with a C-ion pack, or any supercapacitor-based technology, because the power characteristics are constant all the way through the discharge.”

A Change of Clothes