RESEARCHERS have developed a method to thoroughly assess the risks associated with fuel supply chains, showing in a UK case study that renewables are less risky than fossil fuels and nuclear power, in contrast to previous studies which imply that renewables carried a greater risk.

The energy crisis has been dominating headlines lately, particularly in the UK where a shortage of HGV drivers ultimately led to a shortage of petrol, exacerbated by panic-buying. This is on top of rising gas and electricity prices – which has occurred due a complicated mix of factors – has had knock-on effects such as fertiliser plants being forced to close and a subsequent shortage of food-grade CO2.

Understanding and mitigating risks in fuel supply chains therefore seems more pertinent now, especially as countries look to transition away from fossil fuels. A new study looking at these risks has been published in IChemE journal Sustainable Production and Consumption by Colin Axon, Senior Lecturer in the Institute of Energy Futures at Brunel University London, and Richard Darton, a Professor at the Department of Engineering Science, University of Oxford.

The study says that many previous models looking at energy security didn’t take all risks into account, often focussing on either long-term risks such as the climate crisis or short-term risks such as powerline failures. The new research performs a detailed analysis for the whole supply chain for each of the 27 fuel categories identified. It includes renewables, fossil fuels, and nuclear, and also includes “demand reduction” – caused primarily by improved energy efficiency and behavioural changes – as a hypothetical fuel.

Transport is often neglected in energy system models which can underplay the risk associated with moving large quantities of fuel.

Looking at each stage of the supply chain

Studying individual stages within supply chains makes it easier to identify where different risks can occur, and the authors divided up the supply chains into six stages: exploration, exploitation, conditioning the raw resource into fuel, converting the fuel into its final energy form, distribution of energy, and consumer use. For each stage, they looked at the activities that take place and how these could be impacted.

Transport risks are accounted for in each stage where it becomes relevant, and the authors note that transport is often neglected in energy system models which can underplay the risk associated with moving large quantities of fuel.

The analysis for the whole supply chain of each fuel showed that some stages are irrelevant for certain fuels, for example, offshore and onshore wind where wind power is converted into electricity at the source. Other renewables such as low-grade thermal energy from the sub-surface have no distribution stage as the energy is used locally.

They defined a total of 34 risks falling into seven different categories: economic, environmental, innovation, manufacturing, political, skills, and technical. The environmental risk group incorporates the effects of climate change through risks such as natural hazards and lack of water availability.

They devised a method to calculate a composite score for the overall risk of each fuel, based on a risk matrix looking at both the likelihood and impact of each risk.

Darton told The Chemical Engineer that most people think energy security is mostly related to the political and financial risks in the international markets, and while this is a genuine risk, there are many others that are not considered. “There are very many risks, not commonly appreciated which are nearer to home and are really important. For example, we identified ‘skills’ (lack of) amongst the potential causes of risk to the energy system, [including] ‘lack of vocational training in the local workforce’”. He said that this factor could be applicable to HGV drivers where there is a current shortage.

One of the many problems contributing to rising energy prices at the moment is a drop in wind speeds. Previous studies have indicated that the highest risks for renewables are factors such as weather dependence and uncertain production volumes, however the new research categorises this under “quality of fuel source” in the environment category. Axon explained that thinking of weather as a quality risk shows that it’s something to be considered when thinking about portfolios of technologies at a national level. However, their study looks at long-term risks, which shows that changing policy and regulation is much more likely to inhibit renewables.

“The point is that changing policy and regulation inhibit capital investment and investment support for innovation, having effects many years along the line,” said Axon. “In the 1990s and 2000s, there was a string of Energy White Papers issued by the UK Government, each saying something different, sometimes completely contradictory, adding new ideas, or hinting at changes in policy direction. This is not conducive to long-term decision-making.”

Looking at the bigger picture also enabled them to look at whether particular risks were low or high across the different stages of the supply chain. For example, for oil and gas exploration, lack of access to capital is considered to be very important in comparison to biogas which needs minimal investment for exploration.

They also found that sharing infrastructure between supply chains can also lower risk as it reduces different sorts of infrastructure required. Sharing can lower the barrier for new fuels that can utilise the same infrastructure, but the opposite is also true and helps to explain why initiatives such as district heating are difficult to implement as they require new infrastructure.

They performed their risk analysis on the 19 relevant fuel categories in the UK as a case study. Using their risk score, they created a table ranking the fuels according to risk. Non-renewables, including nuclear, were found to have the highest risk, and renewables the lowest. Bio-derived fuels are ranked in the middle, which is higher than might be expected. This is because the chemical processing required is similar to conventional sources of fuel, which they say explains why biofuels are not making as much impact on the market as people had been hoping they would.

Fuels with similar scores were put into groups A to E, with E being the least risky group and A being the riskiest group. Group A includes unconventional gas (such as shale gas and coal gasification), conventional gas, oil, and nuclear which are ranked 1 – 4 in terms of having the highest risk. Group E consists of solar (electric) and solar (thermal, water) which are ranked as 18 and 19 as they have the lowest risk. The groups and their risk rankings can be seen in the figure. 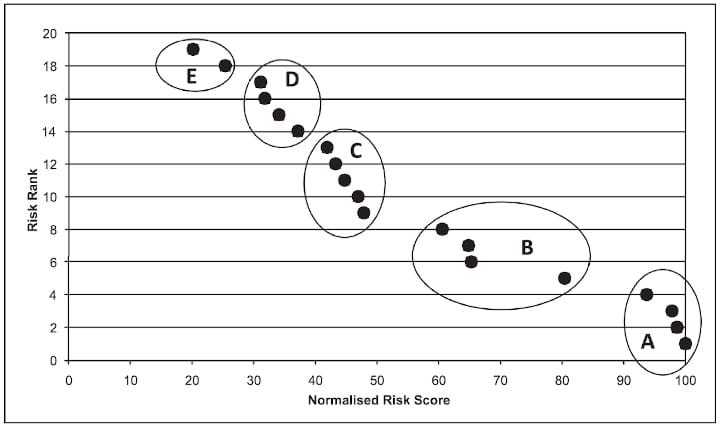 When asked if the study could have predicted the current problems such as gas shortages and petrol shortages, Darton said: “We cannot of course predict any particular risk event happening, any more than a climate-change scientist can tell you if it will rain tomorrow. But by taking a cool comprehensive look at all the risks in the energy system, we draw attention to a very wide range of risks, and identify the most important, for which planning and precautions should be made.”

“We could not predict such short-term turbulence, but we drew attention to the high-risk nature of fossil fuels (they are all in the cluster of most risky fuels, together with nuclear). This is not as a result of any prejudice on our part, but simply arises from looking at all the risks in their supply chains – and there are a lot of risks in this cluster! Thus it is an excellent idea to diversify into alternative fuels – renewables, for example - quite apart from the benefit to climate. This is a conclusion quite opposed to what was a broadcast dogma for many years, that renewables were more risky than fossil fuels: the wind stops blowing and the sun, inconveniently, disappears at night. Renewables are of course not risk-free, they are just, on balance, less risky than fossils.”

The study concludes that energy security can be improved by maximising the use of low-risk fuels, however they caution that they have not taken into account if resources are available in the quantities needed. They said that a lot of adaption will be needed to replace fossil fuels with renewables.

While the paper includes a case study for the UK, the overall conclusion would be similar for other countries with similar resources, which is why fuels were clustered into groups. The exact order in which fuels are ranked is less important than which cluster the fuel belongs to, as this is less likely to vary for similar countries. Future work will involve looking at how the risk might change as the energy system evolves.