A REPORT has evaluated the potential of negative emission technologies (NETs) in the context of meeting the Paris Agreement. The report concluded that NETs cannot remove sufficient carbon from the atmosphere and that focus should remain on cutting carbon emissions.

The new report was released by the European Academies’ Science Advisory Council (EASAC) to assess how negative emission technologies, which can remove carbon dioxide from the atmosphere, could be used to meet the goals of the Paris Agreement. The Paris Agreement of December 2015 committed participants to the objective of keeping the global temperature rise this century to less than 2oC above pre-industrial levels, and to pursue efforts to limit the temperature increase to 1.5oC.

A previous analysis of NETs was performed by the European Commission (EC) in its European Trans-disciplinary Assessment of Climate Engineering (EuTRACE) project in 2014, which concluded that NETs are not a viable option as a solution for near-term climate change but that they should still be investigated to assess their future potential. The EASAC report, Negative emission technologies: What role in meeting Paris Agreement targets?, is an updated analysis based on recent peer-reviewed literature, with more detailed descriptions of the candidate technologies and their future potential.

The report states that NETs should not be relied upon later in the century to compensate for failure to mitigate emissions now. Not only do the NETs investigated in the report fail to reach the level of carbon removal predicted in some climate scenarios, the time taken between researching new technologies and successfully implementing them will take decades. If NETs are seen as a viable solution to climate change, they could influence policy makers to focus on these rather than to prioritise the more urgent need to curb emissions.

Staying within the carbon budget

Climate change scenarios have been calculated by the Intergovernmental Panel on Climate Change (IPCC) and use the concept of a “carbon budget”. This is the total amount of CO2 that can be added to the atmosphere without exceeding the target temperatures. This CO2 budget includes all the CO2 emitted since the Industrial Revolution, so the more that is emitted now, the more difficult it will be to stay within the carbon budget in the future.

In a 2014 report, the IPCC calculated that no more than 1,000 Gt of CO2 (GtCO2) can be emitted between 2011 and 2100 for a 66% chance (or better) of remaining below 2oC of warming. More than a fifth of that carbon budget has already been used in the past five years, and to stay within the budget now requires an end to carbon emissions from fuel production, transport, and energy use by 2050. Some IPCC scenarios rely on NETs after 2050 to compensate for continued emissions, however these projections assume that the technologies are fully functional. The EASAC report assessed the different types of NETs used in climate change scenarios. 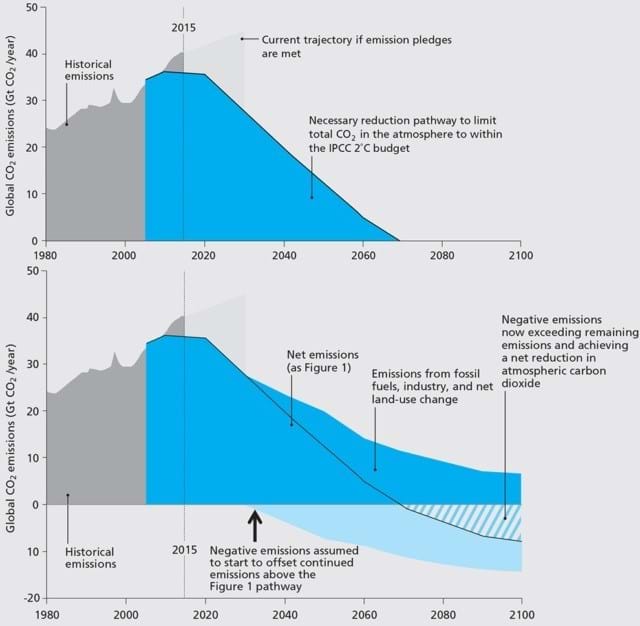 The top panel shows the pathway predicted to stay within the IPCC budget. The bottom panel shows the inclusion of carbon dioxide removal in the scenarios, assuming that NETs are readily available and fully functional. Credit: EASAC / Anderson and Peters (2016)

Plants absorb CO2 and thus have the potential to act as low-cost “technology” for carbon removal. However, for plants to absorb between 1.1 and 3.3 Gt of carbon (GtC) per year, 20–60% of global arable land would be required for their growth, and this would compete with land needed for agriculture. Afforestation and reforestation have already taken place in parts of Europe and China and while they show potential for carbon storage, numerous challenges have also been identified.

It is possible that carbon stored in the soil could be released during planting. Also, nitrous oxide emissions from fertilisers would increase and would have adverse effects on biodiversity. A significant change in land use has the potential to cause increased photoevaporation, changes in cloud cover, and changes in how much sunlight is reflected from the Earth’s surface. The carbon captured in plants is also vulnerable to fires, pests, and diseases – all of which are likely to increase with climate change. Using forestation as a carbon sink also needs to consider current rates of deforestation and that this would need to be dramatically reduced.

Increasing the storage of carbon in soils can be achieved by modifying agricultural practices. This method has the potential to absorb 2–3 GtC/y if carbon is stored in the top 1 m of soil. However, there is currently no incentive to implement this method and it requires further research into land management.

Fast-growing crops can be used to replace fossil fuels as a source of thermal energy. Growing the biomass fuel absorbs CO­2, and the CO2 can be prevented from returning to the atmosphere during combustion by capturing it from flue gases and storing it. Growing biomass is an existing technology, and carbon capture and storage (CCS) is a viable technology.

However, to implement BECCS on a large scale would require a vast amount of arable land which would compete with the land needed for afforestation and agriculture. BECCS can also be limited by the availability of nutrients and may lead to increased water usage.

BECCS should not become relevant until fossil fuel use is restricted, and fossil fuel power already uses CCS. There are also many uncertainties related to this method that require further study.

Natural weathering draws CO2 from the atmosphere when silicate or carbonate materials are dissolved in rainwater. Enhanced weathering increases the rates of geochemical processes and is estimated to remove 1 GtC/y. One proposed method involves spreading finely-ground silicate rocks over large areas of land. This method has the downside of requiring mining and transport of large quantities of minerals and currently has only undergone limited laboratory testing.

This is a system where air flows over a contactor that removes CO2 and then returns the CO2-depleted air to the atmosphere. The technology is currently at the demonstration stage and the first direct air capture plant opened in Switzerland in 2017.

Due to the large amount of air that needs to be passed through the contactor, the size and cost of the equipment are both large. There are also increased energy and water demands, and the potential for low CO2 levels to damage local vegetation.

Carbon dioxide can be buried in the deep oceans when certain plankton which store CO2 sink to the bottom. Adding nutrients to the oceans could encourage the growth of these plankton. The most promising nutrient identified so far is iron, due to the large ratios of carbon to iron in plankton, but the addition of iron could stimulate the growth of species which cause toxic algal blooms. Another problem is that most of the stored carbon would be released when the plankton decays or is consumed, and only a small proportion reaches the deep ocean. This would require a large increase in plankton and the ecological impacts of this are very difficult to predict. Ocean fertilisation is unlikely to remove more than 1 GtC/y, which makes it a high risk for very little gain.

CCS is currently well established for oil and natural gas fields and has been implemented in some power stations on a small scale. One of the issues with CCS is the loss of efficiency when converting fuel to electricity which increases energy costs. However, research is ongoing and second-generation technology should result in a 30% cost reduction.

Other NETs rely on CCS, but it is not yet at the stage where it can be considered “off-the-shelf” technology. There are also public concerns over the safety and environmental issues associated with carbon storage.

Commenting on the report, Myles Allen, professor of geosystem science at the University of Oxford said:

“The report re-emphasises, with admirable thoroughness, what everyone knows: we won’t stop the world warming until we work out a way of disposing of carbon dioxide without dumping it in the atmosphere. Yet the the report also ignores recent innovative policy ideas that might make large-scale CO2 disposal a reality. There is only one institution in the world with the capital, expertise and resources to dispose of CO2 on the necessary scale, and that is the fossil fuel industry. We have to work out how to give it the incentive to do so.”

Phil Renforth, lecturer in the school of Earth and ocean sciences at Cardiff University said:

“Negative emission technologies only make sense in a world in which emissions are nose diving towards zero, so the EASAC’s call for a commitment to strong and rapid mitigation is reasonable. However, waiting until emissions reach zero before researching negative emissions is a dangerous gamble, one that may commit us to excess atmospheric CO2 without scalable methods to remove it.”

“The EASAC report is scientifically sound and politically important. Its main message is clear enough: don’t put off the cleanup for 50 years, as is currently the case in most emission-scenarios that avoid climate chaos. The key issues are now of scale: the scaling-down of the unrealistic use of negative emissions in climate models, and the scaling-up of ambition to achieve net zero emissions, as rapidly as possible.”

The full report can be read here: http://bit.ly/2EyTGvz