A NEW model in the production of biofuels and chemicals by metabolic engineering could be enabled by a novel one-step method, according to researchers.

The technique, called CRISPR-AID, is based on the CRISPR system of modifying genes within a cell, and is expected to lead to higher productivities and yields.

CRISPR is a synthetic biology technique used to cut a cell's genome at a desired location, allowing existing genes to be removed and/or new ones added

“It’s not just an incremental improvement – it’s a new way to do metabolic engineering,” said Huimin Zhao, chair of chemical and biomolecular engineering at the University of Illinois at Urbana-Champaign (UIUC), US.

This is achieved by changing or deleting the expression of several target genes to overcome a cell’s natural function. However, finding the correct combination of modifications is a huge challenge, and targets are usually tested in a series of time-consuming steps.

These steps limit productivity and the yield of the final product, but new work from scientists at UIUC and Zhejiang University, China, describes how to combine and execute them simultaneously.

As described in Nature Communications, CRISPR-AID combines three CRISPR proteins, which had each been designed to carry out a common genetic manipulation: activation, interference, and gene deletion. As a result, the team says, the range of genetic manipulations that can be tested within a cell will be broadened. 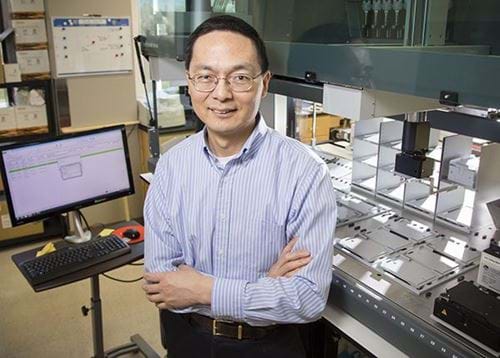 “We can now work with 20 targets,” Zhao said. “We can implement all of these [manipulations] for each target in a combinatorial manner to find out which combination actually will give us higher productivity or yield of the final product.”

The researchers applied their method to Saccharomyces cerevisiae, a species of yeast that is used in winemaking, baking, and the production of biofuels. It resulted in a three-fold increase in the production of β-carotene, and a 2.5 times improvement in the display of an endoglucanase enzyme on the yeast’s surface.

While the method will allow researchers to easily explore millions of possible gene target combinations, the team says that the next challenge is to find a way to discover the optimal combination.

To address this, the team plans to develop a high-throughput screening method, or use a robotic system that automatically produces synthetic biosystems. It also hopes to test the method on other organisms, eventually on the genome scale.

“If we can do that, we can make it truly modularised, and also standardise the procedure,” Zhao said. “Then we really increase the throughput and the speed of metabolic engineering.”