RESEARCHERS at the University of Waterloo, Canada, have created a novel advanced ultramicroporous carbon powder that could be used to capture carbon dioxide (CO2) from industry.

CO2 is a greenhouse gas, and the primary contributor to global warming. Upon contact with the surface of carbon, CO2 molecules stick to it via adsorption. Carbon is an abundant, inexpensive, and environmentally-friendly material, making it a good candidate for CO2 capture. 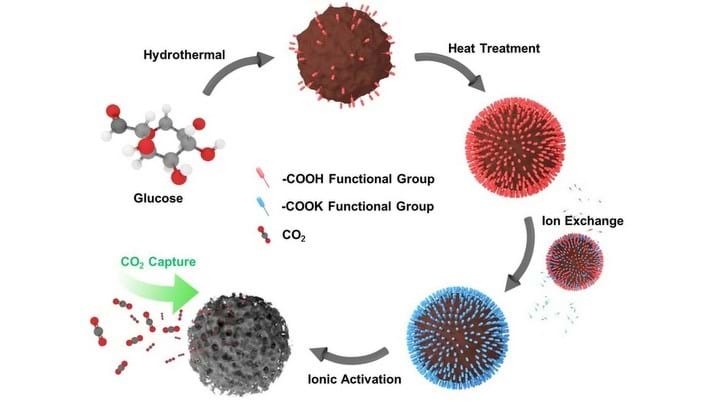 In the synthesis technique used to create the powder, glucose is hydrothermally reacted to produce a brown carbonaceous precursor which is then calcined in an oxidative heat treatment. The treated solid is then added to a solution of potassium hydroxide for ionic exchange, and then used in a pyrolytic etching process to promote the formation of fine, uniform micropores. The resulting carbon spheres making up the powder are ultramicroporous, and the vast majority of the pores are less than 1 nm in diameter.

The researchers found that the size and concentration of pores could be tuned by adjusting the ion exchange capacity. This is done by using different temperatures for heat treatment.

Once the powder has been saturated with CO2, it could be regenerated. Another option would be to transport the powder to storage sites where it would be buried in geological formations to prevent CO2 release into the atmosphere.

Currently, amine-based solvents are being used in large-scale carbon capture and storage (CCS) projects, and for large demonstration projects at power plants. Zhongwei Chen, a Chemical Engineering Professor at Waterloo, claimed that the novel powder is in some ways superior to amine-based technologies.

The powder requires less energy for regeneration, it does not release toxins or environmental contaminants, and it avoids alkali conditions (required for efficient CO2 capture by amines) which would cause serious corrosion of the equipment. The latter greatly reduces the maintenance fee of the equipment.

In addition, as a post-combustion carbon capture technology, like amine-based solvents, carbon powders could be “integrated into existing power plants without altering the combustion process,” said Chen, adding: “It can be easily applied in the exhaust system by means of impregnating carbon powder onto filter media without additional equipment or extra power.”

The process used to create the capture powder could also be used to create optimised carbon powders for other purposes, Chen explained. These purposes include water filtration and energy storage, the other main strand of research in his lab. “This holds great potential and significance both in academia and industry,” said Chen.

The researchers at Waterloo are now working to optimise their carbon powder to further reduce technology costs. They are also attempting to develop technology that would allow captured CO2 to be converted into fuels and high-value chemical products, such as methane, ethanol, and syngas.

The process and powder were developed by researchers in Chen’s lab, who collaborated with colleagues from several universities in China.

Adsorption technologies are among several technologies which are considered promising for their potential to deliver lower cost carbon capture. Other technologies include, non-amine solvents, membranes, and the Allam cycle. In the case of carbon powders, testing is at the proof of concept (lab test) phase.

“Numerous companies are launching the research and application of advanced porous materials for capturing CO2, as a substitute of conventional amines absorption technology progressively, which have delivered apparent shortcomings I have mentioned,” said Zhongwei Chen. “A representative example is ClimeWorks, a Swiss company which extensively employs porous carbon granulates as the filter materials for capturing CO2.”