Inovyn
The Power to Methanol demonstration plant will be located at Inovyn’s Lillo site in Antwerp, Belgium

Methanol is an essential, multi-purpose raw material for the chemical industry, and it has many applications in wider industry. It serves as a precursor to other chemicals, including formaldehyde which is widely used, especially in polymer manufacture. Additionally, it can be used as a fuel, and it is a promising energy carrier. Currently, methanol is produced using fossil-based raw materials, emitting CO2 in the process. 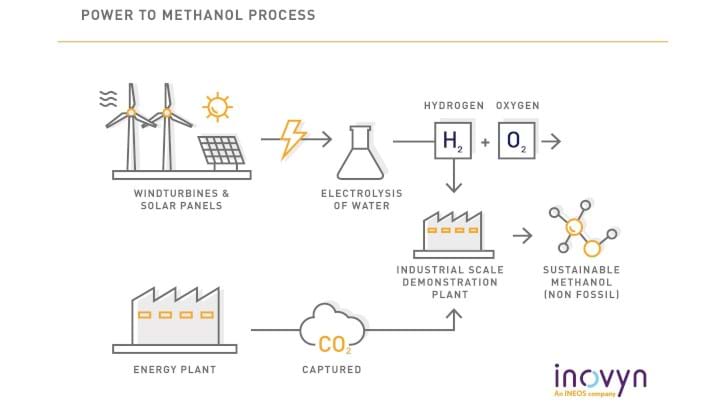 The Power to Methanol project will produce methanol using captured CO2 and hydrogen (H2) generated using renewable energy. Carbon capture and utilisation will enable partial recovery of CO2 emissions. For each tonne of methanol produced, at least one tonne of CO2 emissions would be avoided.

In addition to a site for the plant, Inovyn will provide its expertise in hydrogen production and electrolysis. Hydrogen can be produced via electrolysis of water, a process which uses electricity to split water into H2 and oxygen. For renewable production, the electricity is produced using renewable energy sources.

Methanol produced at the demonstration plant would used by chemical companies in the Port of Antwerp, home to Europe’s largest integrated chemical and energy cluster. Future developments could see an increase in the output volume of the sustainable methanol plant for use by wider industry, including as a sustainable fuel for marine and road transport.

Construction of the plant is scheduled to begin in 2022, with operationality expected in the same year. The partners have not disclosed the cost of the plant.

Hilde Crevits, Flemish Minister for Economy, Innovation, Work, Social Economy and Agriculture, commented: “Innovation is essential for the transition to a sustainable, circular economy. But collaboration is also crucial. The consortium demonstrates that by combining the know-how and expertise of different partners we can get a whole lot moving.”

Government-owned investment company Flemish Environmental Holding (VMH) is a partner is the consortium and will contribute financing to the project.

ENGIE will contribute its knowledge of the electricity market, as well as its technical knowhow in electrolysis and CO2 capture; Indavar will provide CO2 storage expertise; Oiltanking will contribute logistical knowledge on handling, storing, and transporting methanol and other associated aspects; Fluxys will bring its infrastructure expertise and specific expertise regarding green gas certification; Port of Antwerp will act as a bridge between private companies and the Belgian Government.